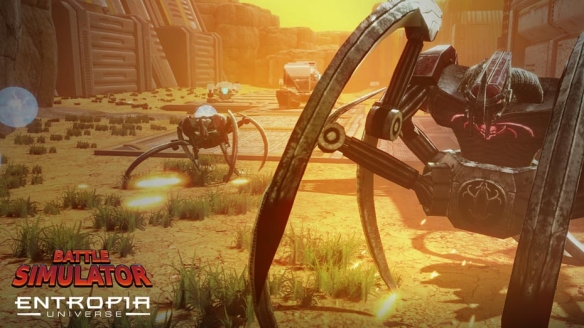 The Entropia Universe Battle Simulator is a time-trial assault course. Exterminate all robot enemies and finish as fast as you can!

Battle Simulator runs are performed using a premade avatar with standardized skills, weapons and armor. Ammo consumption and deterioration are disabled. Additionally, all buffs are paused while inside the Battle Simulator instance.

How to Get Started

The Battle Simulator can be accessed anywhere in Entropia Universe:

Completing the Battle Simulator course gives access to a special loot crate. Unclaimed loot from other participants’ uncompleted runs may also increase the total value of the loot crate.

Completion times will be entered into the Battle Simulator weekly leaderboard, where participants compete for additional rewards (see the “Leaderboard” section below).

Be on the lookout for the occasional message at the start of each run announcing extra bonus loot for completing the instance!

Viewing the Leaderboard
You can view the current leaderboard by pressing the ‘Scores’ button opposite the ‘Register’ button in the Event List interface (see above).

Prize Pool
A portion of each Battle Simulator entry fee is added to the leaderboard prize pool; the current value of the prize pool can be viewed on the leaderboard display. Prizes are distributed using a dynamic payout structure: the more runs attempted, the more positions that will receive a prize and the larger the prize values. At the end of the week (midnight on Sundays, UTC) leaderboard prizes are delivered to the planet storage of each winner’s current avatar location, along with a confirmation message sent via the Message Center.

A symbol directly under a participant’s ranking number indicates that the participant will receive a prize for their current leaderboard position. Hover over the symbol to see the current prize value.

New to Entropia Universe? Check out our Beginner’s Guide.